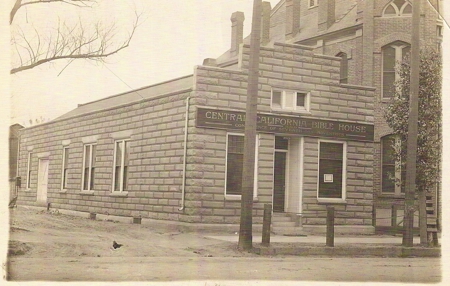 The initial gold rush had passed, and many of the 49ers had faded away; but they had made San Francisco the major West Coast city. Yet when layman Merritt Kellogg (the younger brother of John Harvey Kellogg and Will Kellogg) and his family arrived there in 1859, they found themselves the sole Seventh-day Adventists.

Kellogg’s first convert was B.G. St. John, and together the two men gathered a company of believers that worshipped in St. John’s home. By 1865, they realized that a pastor was needed.

Raw gold was still common currency in the City by the Bay, so the company of believers sent a gift of gold to the General Conference with a request for a minister – $135 worth of gold.

The two evangelists focused on areas north of the City for the next several years. The first Adventist church West of the Rockies was built in Santa Rosa in 1869.

It wasn’t until 1871 that Loughborough returned to San Francisco where he baptized 70 new members, including almost all of a local Millerite Advent Christian Church.

News spread. James and Ellen G. White visited the San Francisco believers the next year.  And in 1874 General Conference President G.I. Butler gave up his duties to go as a missionary to California.

The success in San Francisco led to meetings throughout the area, including San Jose, Santa Clara, Gilroy, Soquel, and Hollister.

Into the San Joaquin Valley

In 1873, at a camp meeting in Yountville, the California Conference was officially organized with seven churches and 253 members. Loughborough was elected the first conference president.

Sitting in the camp meeting audience was Moses J. Church, an engineer overseeing the digging of a thirteen-mile irrigation canal from the Kings River to a wheat growing venture in Fresno. The endeavor would be the start of the massive irrigation system that would make the San Joaquin Valley one of the most fertile regions in the world.

Church was so impressed with what he had heard that he stood and declared, “I am engaged in constructing an irrigation canal and I have 40 men in my employ. But from this time, work shall all stop on the Lord’s Sabbath.”

Back home, Church passionately shared his new faith and soon there was a new 50 member congregation. He also wrote tracts and letters encouraging people to move to Fresno. So many Adventists relocated that Ellen G. White became concerned. She wanted Adventists to spread out, not to congregate in Fresno.

By 1888 the Fresno congregation had grown large enough to build the largest church building in the city.

“None of us, it seems to me, can doubt the utility practicability of good camp meetings. They are almost indispensable to the work of our cause,” Loughborough said.

Wherever pitched, the tent meetings drew attention and visitors. When camp meeting ended, a public evangelistic meeting followed. Congregations began to spring up everywhere in the next two decades in the coastal and Bay Areas and up and down the Valley.

Local newspapers provided extensive coverage. In 1888 the Selma Irrigator wrote of Mrs. White, “This lady is one of the most impressive speakers that has ever visited this community.”

By 1913 nearly half the conference membership of 1,200 attended. Languages needed were German and, beginning in the 1920s, Spanish.

Central California Conference was officially organized on March 1, 1911. J. H. Behrens was the first president. He would be followed by eighteen others. San Francisco and adjoining South Bay Area were transferred to Central’s territory in 1932.

In 1897 the first church school started in Fresno. Armona Union Academy was established as the first 12-grade academy in 1911.

In 1929 land in Wawona was purchased for a youth camp. It would grow to 31 acres.

In 1932 the Conference office relocated from Fresno to San Jose.

In 1948 Pathfinders began. Conference Youth Director Henry Bergh wrote the song for the new Pathfinder Club program. Henry gives all the glory to God as he is not a song writer.

In 1948 a former World War II military base on the coast near Watsonville was purchased for a boarding school. Monterey Bay Academy opened in 1950.

In 1984 the Conference office moved to its current location in Clovis.

Central has long been one of the most ethnically diverse conferences in North America. In the first part of the century, there were Italian, German, Japanese, and Russian churches.

Today, Central California Conference has 35,698 members in 129 churches and nine companies. Membership represents 8% African-American, 55% Anglo, 8% Asian, and 29% Hispanic. There are 25 schools and more than 1,850 students.

“For me, the biggest impact is going into the vault and putting my hands on the first set of the 1911 Executive Committee minutes, and to sense the commitment of the blessed hope that rang in the hearts of those leaders 100 years ago,” says Ramiro Cano, the 19th conference president. “We have the same message, the same burning desire to see our Lord Jesus come quickly. Oh, how I pray that I will be the last president.”

We use cookies to personalize content and ads, to provide social media features, and to analyze our traffic. We also share information about your use of our site with our social media, advertising, and analytics partners.